Take the KISS, win the game 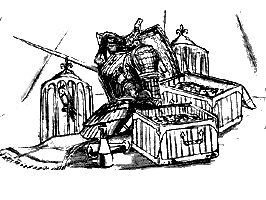 Personally, I was always amazed by games, those won by simple, elegant, yet devastating unit combinations. Actually the principle of Keep It Simple Stupid is relevant in AOC as well as in engineering.

One of the good things about Koreans is that you are “on your own” during the first ages, they have no unique economic advances to cord your creativity. So to say, you are forced to figure out brand new strategies to sell some pig in a poke!

Daut decided to go for a Fast Castle, and built a forward Monastery with a Siege Workshop. The funny things came afterwards. First of all: did you ever wonder, what is the easiest way to get behind the opponent’s walls? Daut won’t let you alone with this question, he annoyed Tammy with his Monks from the first minutes, and forced a villager inside to change colour. In the end he broke through by the combination of Monks and Onagers, and this combo proved to be surprisingly effective. The only viable cure for this venom is to gather some Light Cavalry – Daut knew that well, he could even see the flagged Stables around, he quickly added some spice to the supper in the shape of another good combo, namely Pikes and Rams. Since the Onagers took care of the archers, the Pikes of the ponies, while Monks and Rams handled everything else… Well, Daut had the whole set of rock-paper-scissors on his side.

From a hot trouble like that, there was no way out for Tammy, when his opponent started to build a Castle in the middle of Tammy-Town, the Hun vizier willingly surrendered.