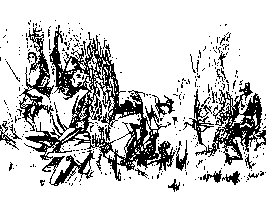 Sometimes an opponent with unsporting behaviour drives you crazy… then simply bores you. What about three of them?

The Sou team decided to double sling the Mayan player, Zen, while the other team tried to flush him to prepare the battlefield for their pocket, Bulsu. The Sous walled up completely and pretty early, the flushes have been muted.

The constant flow of Elite Eagle Warriors devastated Bulsu’s and Zuppi’s cities, but they were unwilling to resign: instead of that, they spreaded their alive villagers all over the map. ZeroHour happened to be in a pinch: all of his three opponents started to systematically take down his walls. However, in this impossible situation, the resigning wasn’t in ZeroHour’s mind either, he rebuilt his defensive structures again and again, he was forcing his enemies to go on tile by tile.

Finally, the bored Sou team broke through and erased the last opponent from the map. Or didn’t they? ZeroHour sent his whole population to emigration! A hide&seek game started, the busted enemy units were chased around and around. In the meanwhile, strange lines appeared throughout the map: the Sou-villagers entertained their Lords with mysterious “wall messages”…